An Unexpected Hero -No mountain too high, No river too deep

Israelis are both intensely proud and ruthlessly critical of their country. And they have good reasons for both. The newspapers are full of red-faced politicians who have abused their role, bribed their constituents, sexually harassed their staff and lied to their public.

The drivers are dangerously impatient, people rarely wait until the other person has finished his sentence, and the mobile phone has become a Deity that even the more religious hold close to their heart.

On the other hand when I read the list of Israel’s achievements by Gerardo Joffe, President of FLAME, Facts and Logic About the Middle East, Israelis have every reason to celebrate their long and outstanding list of accomplishments unparalleled by any other country in the world.

Perhaps that’s is what makes his place so extraordinary.

But what strikes me most profoundly, what fills me with awe and pride and has me scratching my head at the same time, is with all that is going on , with over a million refugees taking up home here in only one year, with bombs still falling and soldiers still leaving home and mothers not sure how and when they will return, there are still individuals and organizations in this tiny speck of a country who hold a unwavering and passionate commitment, to make this world a better place.

Israel seems to have a knack of bringing best of creative minds and spirits together, and although they may not be so good at moving mountains they are breathtakingly good at climbing them. Just challenge an Israeli to solve a problem and they will climb Everest or dive into the depths of the Amazon to do it.

And that brings me to Yoram Porath CEO of Outline Films who I had the great pleasure in listening to today as he outlined his documentary, Keepers of Eden.  This is a documentary about the Huaorani People of Ecuador. 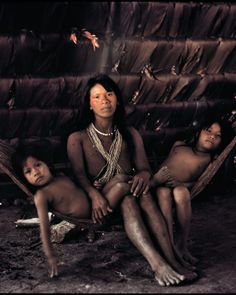 For thousands of years, the Amazonian rainforest of Ecuador, the Oriente, has been home to the Huaorani (meaning ‘human beings’ or ‘the people’). They consider themselves to be the bravest tribe in the Amazon. Until 1956, they had never had any contact with the outside world. The Huaorani are outstanding hunters and feared warriors.

As I listened to Yoram I was touched and moved by this group of people who live in total balance and harmony with the Earth. The Huaorani understand not only the wisdom of the trees and plants and animals but have discovered how insects form an network of energy that can guide Huaorani’s through the forest of the Amazon with safety and ease.

Until recently they lived in total reliance on the natural world.

Porath’s curiosity and desire to open the eyes of the world and make a difference to these wonderfully joyful people and the Rainforests of the Amazon came out hearing about author John Perkins, who wrote a book called Confessions of an Economic Hit Man. This book published in 2004 describes Perkins’ account of his career with consulting firm Chas. T. Main in Boston.

Briefly, according to his book, Perkins’ function was to convince the political and financial leadership of underdeveloped countries to accept enormous development loans from institutions like the World Bank  and USAID. Saddled with debts they could not hope to pay, those countries were forced to acquiesce to political pressure from the United States on a variety of issues. Perkins argues in his book that developing nations were effectively neutralized politically, had their wealth gaps  driven wider and economies crippled in the long run.

Perkins describes the role of an EHM as follows:

“Economic hit men (EHMs) are highly paid professionals who cheat countries around the globe out of trillions of dollars. They funnel money from the World Bank, the U.S. Agency for International Development (USAID), and other foreign “aid” organizations into the coffers of huge corporations and the pockets of a few wealthy families who control the planet’s natural resources. Their tools included fraudulent financial reports, rigged elections, payoffs, extortion, sex, and murder. They play a game as old as empire, but one that has taken on new and terrifying dimensions during this time of globalization.”

So what happened? Yoram heard how the Huarani  are now in danger of being erased because major oil companies came in and in their search for and accumulation of oil and gas  they have contaminated and destroyed this part of the Amazon also known as the lungs of the world. Without our lungs there is simply no life.

Historical Media Associates, LLC documents how such oil contamination is causing a fatal blow to both the indigenous people, their culture and the environment. As a result of these “poisoned” living conditions, the native Huarani are suffering from disease on the level of a toxic and fatal plague. All caused by oil contamination.

The despoliation, drilling and oil contamination continue to this very day. Yoram’s documentary KEEPERS OF EDEN presents the empassioned struggle of the Huarani people and their fight for survival.

As an Israeli who was born into a land that has not known a day of true peace one might think that there are enough problems to keep this filmmaker busy for a long time. However, and this is the point, along side the realisation that peace is yet to be a reality in the Middle East the people that live here in Israel are very much involved in making a difference to the whole world and not focus on the issues around them.

I left Yoram Porath’s talk inspired by the generosity and love of humanity that exists here in Israel. And although there continue to be problems, let’s not forget the most passionate, committed, creative and caring people in the world live here also. and that is something to remember.

This entry was posted in Being Here and Now, From the Land of Milk and Honey. Bookmark the permalink.

2 Responses to An Unexpected Hero -No mountain too high, No river too deep